The Pianos Beloved by the Great Master, Sviatoslav Richter 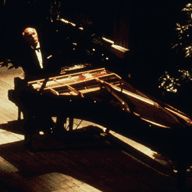 In his later years as a pianist, Sviatoslav Richter, widely regarded as one of the greatest pianists of the 20th century, consistently favored Yamaha pianos. Richter first encountered a Yamaha piano in 1969 in Padua, Italy, the town where Bartolomeo Cristofori invented the original prototype of the piano. At the Menton Music Festival in the south of France, after briefly playing other pianos made available to him, Richter decided on the Yamaha, saying without hesitation, "This one." What captivated Richter at the time were the excellent sense and reliable skills of Yamaha technicians as well as the quality of the piano.

The following year, in 1970, Richter visited Japan for the first time to participate in the Osaka Expo where he made news by choosing to play a Yamaha CF grand piano in all of his performances from the second day on. Subsequently, he began to request Yamaha pianos whenever possible for performances not only in Japan, but also at the Fêtes Musicales en Touraine, which he established, and on his European tours as well.