State-of-the-art LSI digital processing with in-house development and manufacturing and a musical instrument maker’s focus on acoustics. In the 1980s-1990s when the CD medium was at its absolute hottest, Yamaha CD Players led the era by remaining true to the essence of audio playback, inspiring the creation of many of today’s best-known and remembered models. Yamaha’s first CD Player, designed with our own aesthetics of sound and appearance.

Yamaha released its first CD Player in 1982, just after the birth of the CD. Its groundbreaking features included a slide-out disc loading drive mechanism rather than tray-loading, component-style front controls, a mirror that let you see the recorded side of the spinning disc, and an LED bar graph that showed the approximate position of the pickup. For an era familiar only with the analog record, it was probably a natural assumption that the disc and pickup were meant to be seen during play. The choices for a main device were still limited, but this unit straightforwardly emphasized the "sonic difference" with linear 16-bit twin D/A converters and separate power supplies for the digital and analog elements, and laid claim to technical uniqueness with a custom IC developed in-house at the heart of its control system. More than 30 years, later the attention to every detail and neat styling of the Yamaha aesthetic have not lost their luster. 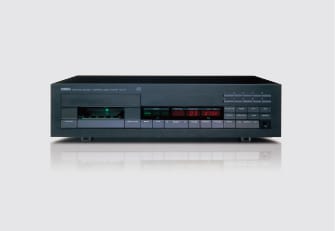 The ultimate version of the CD-1 series, which changed the preconception that "CD sound has no personality." The CD-1a was introduced in 1983 as an upgraded version of the CD-1. Maintaining all the good points of the CD-1 that had earned it such a good reputation, its degree of perfection was raised with improved stability and reliability of operation, common problems for manufacturers of the earliest CD Players. In terms of sound quality, the DAC device and low-pass filter (still a high grade analog filter rather than a digital filter at the time) were reworked, delivering Yamaha’s characteristic richly musical expressiveness and helping to change people’s preconceptions that "CD sound has no personality." In terms of its functions, the electric opener’s key tray and sub-display for memory play usage, major features of the original CD-1, had been removed, and in response to the demands of the market the new unit now featured 10 keys, a headphone jack and a new look for the display panel. Lasting only one year, the original CD-1 was short-lived, but with CD still in its early stages of development this shows that both manufacturers and consumers were still struggling with the new technology. Nevertheless the CD-1a became a long-selling item, Yamaha’s flagship product for three years. Our original best-selling CD Player that broke the 100,000 yen barrier for the first time.

After initially generating tremendous expectations, the CD went into a slump once the first wave of demand had passed. The main reason was that the hardware and software were still expensive. The first CD Player to sell for under 100,000 yen, a major benchmark on the road to full-scale commercial acceptance, was the CD-X1, introduced in 1983 for 99,800 yen. The CD-X1 featured two original LSIs developed and manufactured in-house, significantly reducing the total number of parts in the player to about one-third the conventional amount and becoming Yamaha’s trump card in offering the lowest price in the industry. One of the LSIs was the YM3511 for servo-control, and the other was the YM2201 for digital signal demodulation and processing. With one-chip digital filtering and up to two times oversampling, the latter in particular achieved better sound quality and reliability while simultaneously reducing the cost. The linear 16-bit DAC device became Yamaha’s first ladder type (single). Apart from the mini-component body size and omission of a 10-key pad it was functionally comparable to a high-end model and contributed heavily to the explosive popularity and market expansion of the CD. 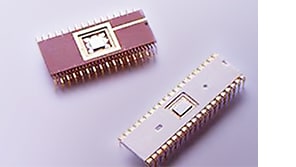 A second generation high grade unit that used our unique VMA method to focus on mechanical vibrations during CD playback. 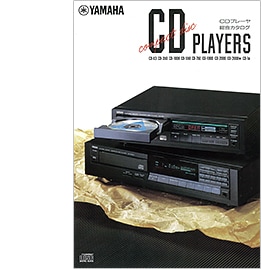 This was a high grade unit that was the first to incorporate Yamaha’s two original LSIs and played a major role in the development of the high performance, low cost CD Player. Standardizing the basic platform with a focus on the control system, this model led to the establishment of a rational approach to further raising the design quality of high end CD Players. In addition to the VM Stabilizer, a copper-plated steel plate attached to the back of the audio board and developed based on the VMA vibration modulation analysis method to determine the effects of vibrations during CD playback on sound quality, its features like a double bottom structure and cast iron heavy insulator gave it a high frame rigidity that helped produce a clear sound image and massive bass. It also featured a powerful power supply unit with even lower impedance and variable output allowing remote control operation, and electric analog volume control with direct connection to the power amplifier. With the linear 16-bit single DAC device, the independent left and right digital filters had an irregular configuration. This model was produced in two styles, the CD-2000 with black panels and the CD-2000W with silver side wood panels. 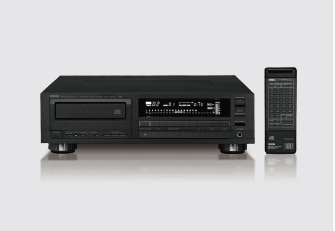 Introduced for the first time, High Bit Digital achieved a total of 16x resolution through a combination of the 18-bit 4x oversampling High Bit Digital Filter and 18-bit Operation D/A Convertor offering 18-bit operation with floating point processing by 16-bit DAC. Taking advantage of this resolution with 0.4dB steps and 120dB pure digital volume dynamic range, it was a highly realistic and simple system with direct connection to the power amplifier. Commercialization of the world’s first CD Player with more than 16-bit precision was the result of Yamaha’s in-house development and manufacturing of all digital processing LSIs including the digital filter, and this model sparked the later high-bit arms race that saw competing multi-bit DAC specifications throughout the audio industry. While high-bit dramatically improved the sound clarity of minute level signals, it was also susceptible to disturbances like digital noise and mechanical vibrations. Great progress was made in this area by the use of radiation and resonance countermeasures including a separate sheet design to make the separate analog/digital power supplies and circuit stages fully independent, a high rigidity chassis with thick aluminum top cover and double bottom, and a floating mount CD mechanism. As a result the new unit weighed 15kg, nearly double that of the previous CD-2000 model. 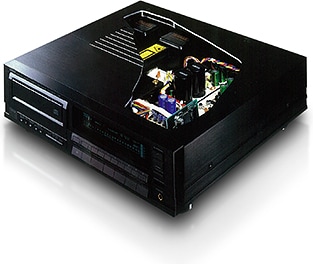 A special release bringing together all the values of separate units in one body in honor of the 100th anniversary of Yamaha’s founding. 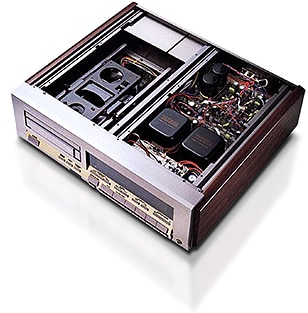 The CDX-10000 was released in 1987 as part of the Monumental Products Yamaha 10000 Series to commemorate the 100th anniversary of Yamaha’s founding. Forming a four-part system together with the MX-10000 Power Amplifier, the CX-10000 Control Amplifier and the HX-10000 Phono Equalizer, it was intended to handle the demands of all media past, present and future. An exclusive product with all-new design, the circuit configuration was based on the era’s latest High Bit Digital (18-bit operation 4x oversampling digital filter + floating point processing 18-bit operation D/A conversion) also used in the CDX-2200, with a low-pass filter combining a fifth-order new active filter and complete DC coupling, and a new CD mechanism featuring a thick broadcast studio-quality 4.5mm diameter motor spindle, a linear motor drive pickup with ultra-high speed 0.7-second access from innermost to outermost track, and four motors. The High Rigidity 2-Box Double Chassis housed the digital and analog components independently in separate compartments, bringing together the values of separate units in a single body. It employed a floating structure using elastic mounts and dampers, and the thorough cutoff of external vibration and absorption of internal vibration were in keeping with the trends of the day. The 10000 series was the origin of Yamaha’s characteristic titanium exterior body color still popular today. 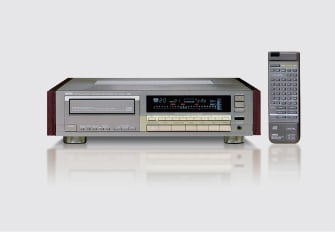 The CDX-2000 appeared in 1987 as an upgrade of the previously released CDX-2200, the first high-bit player. While the exterior appearance and basic design followed that of the CDX-2200, the operation key panel was colored gold and the front panel featured the titanium color of the 10000 series, and its presence was enhanced by the four-piece construction and large heavy insulator inherited from the CDX-10000. Its major claim to fame was the 8x oversampling of its digital filter, and together with digital/analog component separation by the current isolation method instead of the conventional photo-coupler system it achieved a 118dB S/N ratio, phenomenal for its time. Additionally, as a symbol of the glitch-free accuracy achieved by the D/A converter component, it was equipped with the new Pure DAC Direct Switch that output the DAC signal without passing through a low-pass filter, well-received by audio enthusiasts as a novel approach compared to the sound of the "original" DAC. 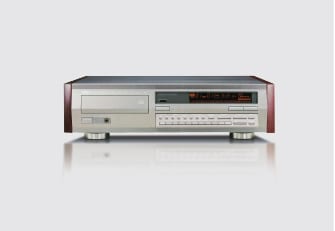 The ultimate in high-bit digital, with 8fs, 22-bit operation and four-DAC configuration 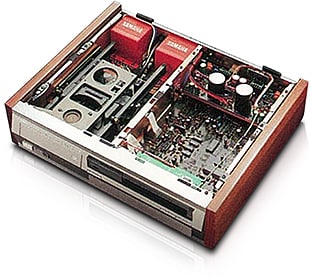 The so-called high-bit arms race that Yamaha initiated continued to escalate year by year, and the release of the CDX-2020 in 1988 saw the development of the New High-Bit System combining a 20-bit 8x oversampling digital filter and 22-bit operation four-DAC system. While conventional 18-bit systems had been turned into 18-bit via floating point processing by 16-bit DAC, this new 22-bit system featured a unique configuration with the latest 18-bit DAC supplemented with an external 4-bit DAC.

Because of this it was able to achieve high resolution of 8x in the time axis and 16x in the amplitude axis with a high S/N ratio reaching 120dB. The chassis was also redesigned, and the unit was replete with heavy equipment features reminiscent of the 10000 series, such as full copper plating in the body interior, spike/pad selection GP feet, a high rigidity mechanical unit equivalent to the CDX-10000, and a D/A separate power supply unit with a large two-transformer configuration. Looking back now it seems as though the high-bit arms race may have gone a bit too far, but the outcomes of light being shone upon the issue of micro-level reproducibility by high-bit and the accumulation in a short time of a knowledge base of how to deal with digital noise and mechanical vibrations undeniably live on as the assets not just of Yamaha but of the entire field of audio in Japan. The unique technology of the I-PDM 1-bit system of Yamaha’s next flagship model, the GT-CD1, couldn’t help but signal the next period of that generation’s high-bit systems. 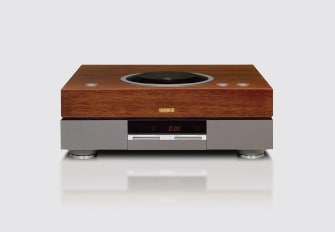 A superlative CD Player embodying the GT Concept that took audio back to its origins.

The GT-CD1 featured accurate reproduction of micro-level signals and the realization of the high rigidity, non-resonant structure to support it. For ten years after the birth of the CD, Yamaha relentlessly pursued this theme before finally arriving at its ultimate answer, the GT Concept (Gigantic & Tremendous) in the GT-2000 analog player, which realized the idea of using the power of gravity to completely neutralize all vibration. The CD mechanism was made secure by mounting it on a 60mm-thick wooden player base housed in a 3kg circular casing carved from gunmetal casting, penetrating and grounded directly to the electronics unit suspended beneath the player base. The CD mechanism did not feature a clamping system, the 160g weight of the brass stabilizer pressing the disc directly to the spindle, covered further with a 10mm glass lid. Completely eliminating the floating mechanism that had become common in the primitive basic structure of the CD Players up to then, it had a profound impact on the audio world of the time. The DAC converter unit featured Yamaha-developed next generation independent left and right I-PDM system 1-bit DACs. While the transport unit and processor unit were completely separated, the integrated separate structure connected them over the shortest distance possible, and its ingenious external design that beautifully expressed what was inside made it a worthy component to play the lead role in the history of Yamaha CD Players. 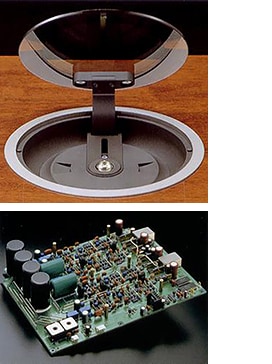