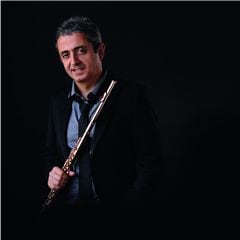 Michel entered the Conservatoire National Superieur de Musique in Paris, in the class of Jean Pierre Rampal and Alain Marion at age 14, and two years later, in 1979, won first prize for flute and first prize for chamber music in the class of Christian Lardé. In 1978, he won the International Competition of the Guild of Artists Soloists of Paris, then in 1981, the International Competition in Budapest.

The discography of Michel includes an album of Ravel/Cras with Isabelle Moretti in Auvidis Valois, a disc with Mozart's Quintet Moragues which won the Grand Prix of the Charles Cros Academy, and a recording with Saphyr productions of the poems of Ronsard by Albert Roussel with Sandrine Piau, which was hailed by the journal World of Music in July 2006, as "the most beautiful version to date."

Michel was the founder and director of the festival "Music in Grésivaudan" from 1993 to 2003, and currently directs the summer festival of chamber music from Gourdon (Lot) with other members Moragues Quintet.