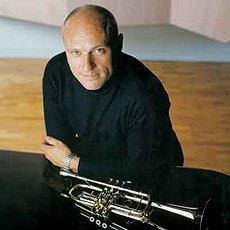 Born in 1951, he graduated with highest honors in trumpet (under the tutelage of Ludovic Vaillant) and in chamber music at the Conservatoire National Supérieur de Musique de Paris. Prizewinner at the international competitions of Toulon and Vercelli, he was a soloist with the Concerts Colonne before joining the Ensemble intercontemporain in 1981. He has also pursued the field of education, both at the Conservatoire National Supérieur de Musique de Paris since 1988, and at the Conservatoire National de Ville-d'Avray. Antoine Curé is a regular guest artist at summer workshops in Nice, Orford (Canada) and Japan, where he has set up a pedagogical method based on creative performance. Antoine Curé has recorded the Trumpet Concertos by Johann Melchior Molter, the second Brandenburg Concerto by J.S. Bach as well as a CD devoted to Jean-Michel Defaye’s three trumpet concertos. In 1994, he took part in the premiere of Midtown, a work for two trumpets by Philippe Fénelon, and in the 1996 French premiere of Requiem by Hans Werner Henze. He has also performed the worldwide premiere of Metal Extension by Yan Maresz, 2005 à Tokyo by Masakazu Natsuda and a solo trumpet piece by Hitomi Kaneko entitled La couche du temps.