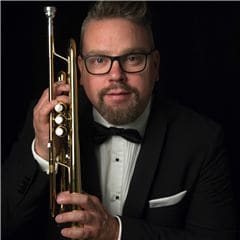 Having studied jazz at the Royal College of Music in Stockholm (KMH), after completing this course, Patrik went on to play with some of Europe’s most well-known jazz groups including the Stockholm Jazz Orchestra, Blue House Jazz Orchestra, WDR Big Band and FR Big Band.

Now based in Stockholm, he has built a reputation as one of the city’s most sought after session players and over the years has appeared on a number of recordings as well as performing in a many theatre productions. In addition to his session work, Patrik also has his own group called the Pat Wood Quartet which plays a mix of Patrik’s compositions as well as standards.

In 2009, the Pat Wood Quartet released its first album and they are currently working on the next one. Alongside of his playing commitments, Patrik is also involved in education and is the Head of Trumpet at the Royal College of Music in Stockholm (KMH) and director of the KMH Jazz Orchestra. Comfortable in a number of musical situations, Patrik is well known for his ability to both improvise and play lead trumpet.